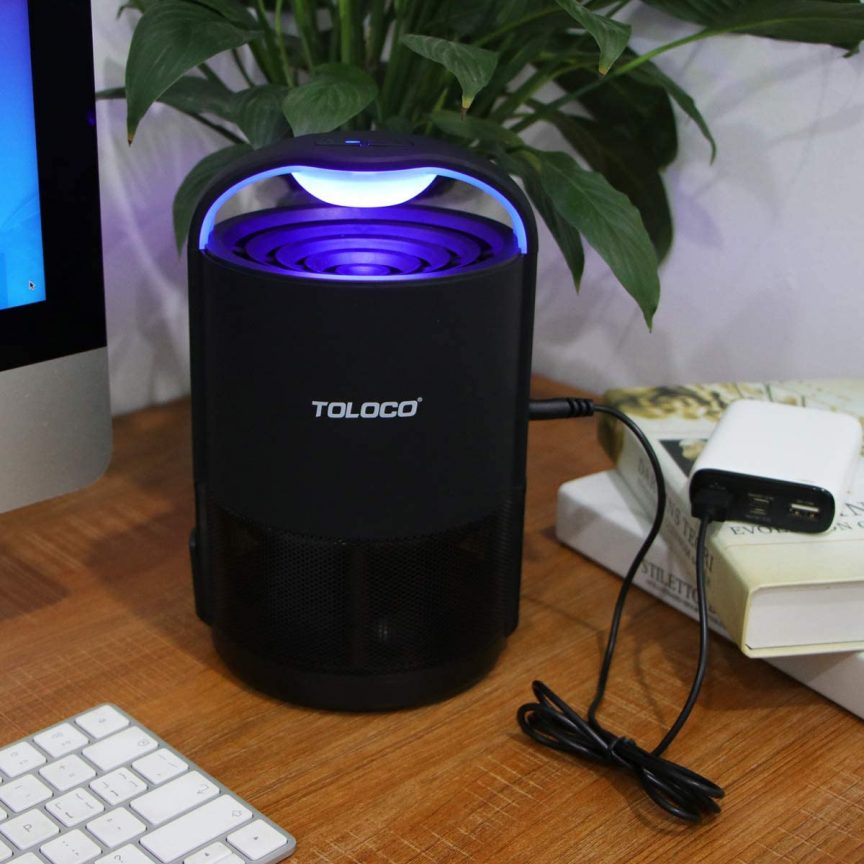 People flock to the Dynatrap Ultralight Mosquito Trap because it can be used indoors. Boasting glowing lights and a surface coated with Titanium dioxide both of which attract mosquitos only to trap them in a confined cage, this device can affect an area of up to 300 square feet. That means you can position it on a patio and trust that it will adequately protect your home. But even if you position it inside your home, the lights are pretty dim and thus unlikely to disturb you as you sleep.

Of course, some people might see that as a negative, especially if the area in which the device has been placed is well lit, this rendering the mosquito killer useless. But the fact that the device is free of chemicals and odors, not to mention portable and effective against other insects like moths make up for any shortcomings that its dim lights introduce. As far as some people are concerned, this is one of the best mosquito killer machines on the market, if not the best. Boasting a pair of Ultraviolet globules, a line seven feet long and a confinement unit, the Dt2000 uses both the warmth generated by UV light and C02 to attract flying insects like mosquitoes.

Once they are in range, it sucks them into the confinement unit and dehydrates them. Where other traps prefer to zap mosquitoes to death, this device’s operations are silent and are unlikely to cause any disturbances. The vacuum fan that does all the sucking is as silent as they come. You need not worry about intrusive scents or smoke. This insect killer’s biggest attraction is the fact that it is effective over an area of one acre. Dynatrap has garnered a reputation for producing some of the most effective mosquito killer machines on the market and their Dt1050 model definitely lives up to the hype. The Dt1050 doesn’t differ that drastically from other high-end Dynatrap mosquito killers. The device uses UV light to attract mosquitoes, at which point it sucks them into a confined space and dehydrates them. The trap can affect an area of half an acre and you can rely on it to execute its operations silently.

It should be noted that there is no such thing as the best mosquito killer on the market. Mosquito killer machines come in various shapes and sizes, and different people have different needs. As such, it is up to you to find a mosquito-killing machine that best satisfies your needs. Of course, it will take time to find the right fit for your mosquito-killing needs, and you should be prepared to perform ample research. This Aspectek device is pretty straightforward in its operations. You have a pair of UV bulbs that glow to attract mosquitoes towards an electric grid that zaps them to death. Boasting a wire mesh that prevents human hands from accidentally touching the electric grid, the mosquito killer can either sit on a flat surface or hang from a wall.

There is little in the way of complexity here. And you need not worry about dangerous chemicals either. All you have to do is to position the device and wait for it to clear your home or office space of flying insects. The fact that the bug zapper is so easy to clean is an added bonus. This Viatek mosquito killer tends to pique the interest of most homeowners because it is so quiet in its operations. The device works pretty much like any other high-end mosquito killer.

Insects are attracted via a high-intensity ultraviolet light, not to mention a surface coated with Titanium dioxide, and can, thus, produce Co2 to which most flying insects are drawn. The baited bugs are eventually deposited in a confined chamber from where they can be easily removed later on.

The fact that there are no pops or explosions of bugs is definitely a draw. You can hang this insect killer anywhere in your home without incurring any notable disturbances. And the small size of the trap makes it portable.

Of course, the fact that this trap is so small means that you cannot trust it to protect you from mosquitos outside. Additionally, while the device will trap the insects it captures, it doesn’t always succeed in killing them; though, that is one aspect you can deal with yourself during the cleaning process. This 6W/12V insect killer generates a soft blue light that attracts mosquitoes to an electric grid that summarily zaps them to death. But if that was all the Anweer Mosquito killer had to offer, it wouldn’t deserve a place on this list, not when most of its competitors are able to deliver the same results, including a collection unit where the dead mosquitoes are deposited.

But the Answer trap does deserve a place on this list primarily because of how quietly it operates. Believe it or not, you can use this mosquito killer in your baby’s room and you won’t wake them.  This non-toxic device is the perfect trap for any family looking for a tool that kills mosquitoes without intruding upon anyone’s peace. People love to rave about the Mbox Insect killer, primarily because the device has mechanisms that generate a scent designed to replicate the smell of the human body. The goal is to attract mosquitoes to this 4.72-inch device at which point they are sucked into an enclosed space and dehydrated over a period of several hours.

The Mbox insect trap will deliver results for a space of up to 400 square feet. The high-end mechanisms it deploys make it effective outside. Though it might take a while, the trap will eventually reduce the mosquito population in and around your home to manageable levels.

If the Mbox insect killer has a downside, it is the absence of a battery. You have to rely on an extension cord to operate the device outside your home. The device can also prove difficult to operate if you are not familiar with it. This mosquito killer is best utilized indoors. You plug it in, hung it in your kitchen, lounge, car, wherever is convenient, and then turn it on and watch as its light attracts mosquitoes to an electric grid that kills them. The device works best at night. Its light isn’t bright enough to compete with other light sources such as the sun. The fact that you need a screwdriver to empty the trap is also irritating.

However, the unit tends to attract more interest in some circles than even the Dt2000 because it is effective at night yet small and portable, free of disturbing chemicals and scents, quiet as they come but also highly affordable. Homeowners are essentially given all the features they require to keep mosquitoes out of small spaces without having to break their bank accounts. With Hausbell, you can look forward to a standard LED light that draws mosquitoes in, at which point a fan sucks them into a confinement unit. Like many of its competitors, this mosquito killer operates very quietly. And the fact that its LED light is so dim means that you can utilize this mosquito killer in your bedroom without worrying that it will keep you awake.

Along with the fact that the device is free of toxic chemicals and is perfectly safe for use inside and outside a home, this Hausbell Mosquito killer stands out because it can catch other insects such as moths and beetles. So even if mosquitoes are not a problem for you, this device can be trusted to control other insects. This device is the future of insect-killing machines. The tool is one of the smallest mosquito traps on the market. It is both lightweight and portable, and you can carry it with you whether you are just hanging out in your bedroom or taking a stroll in the woods. Free of dangerous chemicals and odors, the device will repel everything from mosquitoes to flies and any other insect with wings. The product operates silently, so you need not worry about its insect-filling effects keeping you awake.